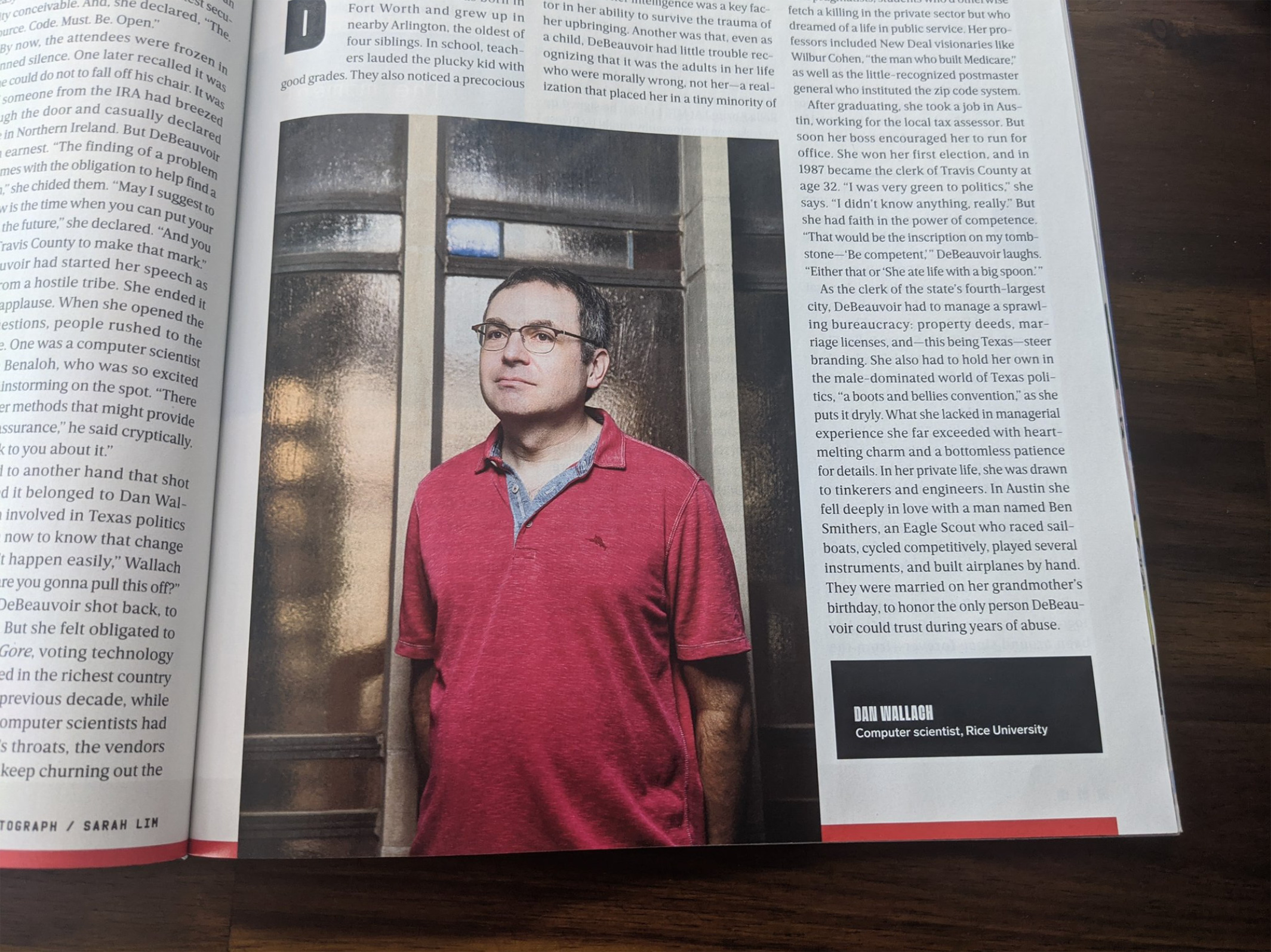 The 2020 presidential election is now upon us, and there are few topics more on the minds of the American public. Rice Computer Science professor Dan Wallach is a computer and election security expert who has teamed with the nonprofit VotingWorks on NSF RAPID grant-funded research to validate and improve open-source technology for voting by mail. Wallach’s work on election security has received significant coverage in the build up to the election, including CNET, USA Today, Wired Magazine, CNBC, MSN, The Boston Globe and more.

Most recently, he was interviewed on the Marketplace Morning Report with David Brancaccio about why we aren't voting online. This segment played on 800 affiliate radio stations across the U.S.

In the Wired Magazine article, Wallach was prominently featured in a profile of Dana DeBeauvoir, Austin’s County Clerk who wanted to change the way Texas voted. In it, the Rice Computer Science professor acts as one of the forces who changed the way DeBeauvoir—who originally didn’t believe hacking an election was feasible—thought about voting going forward. The feature highlights when Wallach was called to testify in front of Houston’s city council about voting safety.

During his testimony, Wallach stood up, crossed the hearing room, and opened a voting machine's hatch, pulling out its PCMCIA memory card. “This is where the votes are,” he said, waving the card while cameras clicked. “This can be attacked.”

Today, DeBeauvoir wants the scientists to know “how much this country needs your wisdom, your knowledge of science”—and help.

The Associated Press quoted Wallach in their story on the impact of a ransomware attack on Tyler Technologies, a company that provides software services to state and local governments. While the company didn’t disclose the details of the hack, Wallach discussed potential harm these types of attacks can do.

“Malware attacks are often not detected for months, and experts warn that gives hackers plenty of time to hop on to connected networks and surreptitiously prepare disruptive attacks. Wallach explained that the attack on Tyler gets hackers “adjacent to sensitive election materials.”

“The idea is that you first establish a beachhead, then spread out laterally and dig in,” he told The Associated Press.

On a more local level, Wallach was interviewed by the Houston Chronicle about their story on how Harris County is the largest in U.S. still voting on machines that lack a paper trail. As many as 1.5 million county voters in this year’s presidential election will cast ballots, a number that would shatter all records. Unfortunately, Harris County wasn’t able to put in place machines that would leave a paper trail before this year’s election because there wasn’t enough time. Elected officials decided to wait to roll those machines out until elections in 2021, which Wallach noted was a good idea.

Read additional coverage on Wallach's take on election security in CyberScoop, The State and Bridge Michigan.

Dan Wallach holds a PhD in Computer Science from Princeton University. In addition to his Computer Science faculty appointment and his research with VotingWorks, Wallach is a Rice Scholar with Rice’s Baker Institute for Public Policy. He currently serves as the IEEE representative to the U.S. Election Assistance Commission’s Technical Guidelines Development Committee (TGDC) and previously served on the Board of Directors of the USENIX Association and on the U.S. Air Force’s Science Advisory Board.