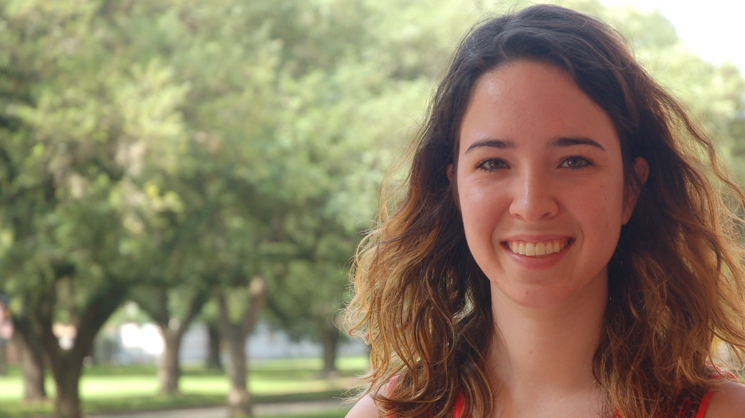 Meghan Doherty, who recently earned a B.S. in computer science at Rice University, can’t talk about her new job with the Department of Defense. Instead, she talks about encouraging other students to power through their CS courses to find their strengths. “Even when you are in classes you don’t really like or feel good at, keep going. I didn’t discover my passion for databases until my junior year,” she said.

Doherty arrived at Rice with a strong desire to complete a CS degree but her passion did not include an interest in learning to program. “I never entered a hackathon and I had only one technical interview,” she said. “People are surprised that I am in CS, but not a programmer. I always felt there was so much more to it than that, like networks, databases, and security.”

She powered through her first two years while searching for her own niche in CS. “Persevering is easier if you find a solid group of study friends,” said Doherty. “CS here is really challenging. Find a good group of people to go through it with.”

Doherty met Zak Kingston in COMP 140 their freshman year. Although they were in different colleges, they worked together all year. Their study group expanded the next year to include Marshall Wilson and Ayush Narayan, both CS students in Doherty’s college. Doherty said, “Then we met Weston [Ruths] around our junior year, in COMP 310,” and Ruths joined the study group for their final two years.

At the CS Senior Banquet in April, Wilson, Kingston, and Nayaran each said Doherty pulled them through the rigorous course schedule. “I was surprised to hear that,” she said. “I’m an organizer, so I just told everyone when and where to meet.” Because the group met to study together from 7:00 p.m. until 1:00 or 2:00 a.m. four or five nights a week, they developed a close relationship.

Each of the members contributed different proficiencies to the team, supporting each other as the entire group worked through challenging courses together. “It helped that we were so eclectic. We went to TA sessions a few times in our really hard courses, but we were almost self-sufficient because of our different strengths.” When Doherty discovered her affinity for databases, she helped the rest work through their problem sets for that course. Other members of the group took the lead for different courses.

In her junior year, she took COMP 430 –Introduction to Databases, taught by Chris Jermaine– and found her niche. “It was the first class that really clicked and that I enjoyed,” she said. “I like getting information out of the databases, coming up with the query is pretty logical. I’m a very organized person and I like the logic of it. Before that [database] course, I really had to power through those first two years.”

Since Doherty knew she was not interested in programming, she took time to determine which CS direction she wanted to pursue. She did not look for an internship after her freshman year, and she spent the summer after her sophomore year helping a small company enter and clean up information in their database. Early in her junior year, she began looking for internships. “I’m an introvert and the career fair was overwhelming, so I searched online. I was looking for an internship in a city where I could live with family,” she said, “any computer science internship that wasn’t heavy into programming.” After a lengthy interview process, she received an offer from the National Security Agency and interned there last summer.

As a new class of Rice Owls prepares for matriculation, Doherty encourages them to find other students and study together. “I was so intimidated when I got to Rice,” she said. “I had been one of the smartest people in my class of 300 in high school, then I got here and I was just average. I met Zak in our first COMP class and he did computer science for fun, in his spare time. He was in a different college, but we fell into a pattern of studying together because we were both new. That first week or two, no one really knows anyone else, and that’s good. You meet people you might not otherwise meet after a semester or two.”