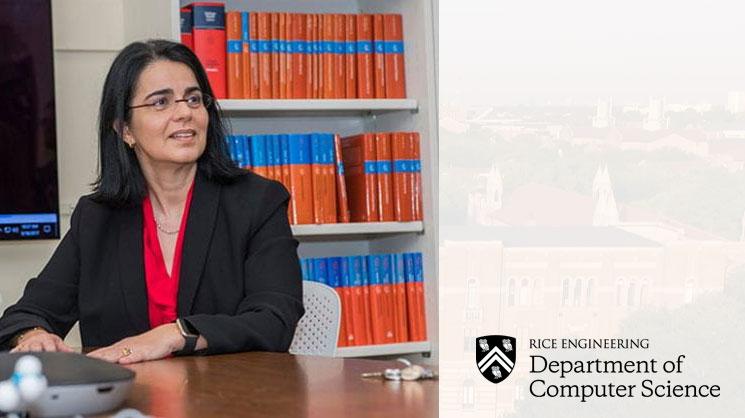 Kavraki, a renowned leader in both computational robotics and computational biomedicine, is Rice’s Noah Harding Professor of Computer Science and a professor of bioengineering, electrical and computer engineering and mechanical engineering. She succeeds University Professor Moshe Vardi, who has directed the Ken Kennedy Institute since 2001 and is now establishing a campuswide Initiative on Technology, Culture and Society.

“Lydia is stepping into a critical role for the university, and I am looking forward to working with her,” said Yousif Shamoo, Rice vice president for research. “

The Ken Kennedy Institute is an intellectual leader across campus and having someone of her stature and intelligence as its leader will be a tremendous gift to all of Rice.” The Ken Kennedy Institute advances research in computing, data science and information technology. It was founded in 1986 as the Computer and Information Technology Institute (CITI) under the direction of Ken Kennedy, a computing pioneer who also spearheaded the founding of Rice’s Department of Computer Science in 1984. Under Vardi’s direction, the institute helped conceive and launch Rice’s Data Science Initiative, led efforts to change how Rice provides shared research computing resources for the entire campus and developed industry partnerships that have provided more than $1 million in graduate fellowship enhancements for Rice students since 2008.

“Clearly, the Ken Kennedy Institute has been at the forefront of computing research, and we will maintain its course of excellence and further energize our community to imagine and build the future of computing,” Kavraki said. “I am a big believer in convergence, that is bringing together diverse ideas and technologies, to solve society’s most challenging problems. Computing provides new approaches and insights. Partnerships with medicine, engineering, natural sciences, social sciences, humanities and the arts hold tremendous potential for growth and innovation for all involved.”

Kavraki said Rice’s computing community faces a dual challenge: to provide leadership, scholarship and innovation in computing while simultaneously connecting with Rice faculty and students to reap the benefits of current computing technologies for research and education.

“Just consider the transformative power of machine learning, AI and data science,” she said. “These technologies help pave a new path for humanity.

“In this context, I believe the Ken Kennedy Institute is in a unique position to connect people who are developing cutting-edge computing technologies with people who are inspired to use these technologies to innovate in their own research,” Kavraki said. “Back and forth interactions will help us reach a new level of achievement. The institute will be a catalyst for computing on our campus. Today more than ever, it is important to foster research collaborations at the frontiers of computing, include diverse points of view and engage both local and global communities.”

How the Ken Kennedy Institute helps meet those challenges will be up to its members, she said.

“What is next? This has to come from the research interests of the faculty, the interests of our campus and our goals and aspirations,” Kavraki said. “Definitely, we are going to build on existing efforts and take advantage of everything that has been done. But this is going to be a conversation with the members, to amplify their research agendas and their research aspirations and to interact with industry.”

That spirit of grassroots collaboration and entrepreneurship is in keeping with Kennedy’s original vision for the institute as both an intellectual crossroads and an incubator where people from many disciplines could meet, collaborate and get support for creative ideas. Kennedy proved the value of the approach in 1989, when CITI won a $22 million grant to establish a national center for research into parallel computing. More supercomputing grants followed, and Kennedy’s efforts established Rice as a global leader in high-performance computing (HPC).

By 2000, CITI had more than 70 faculty members. It had helped Rice attract key industry support for digital signal processing. It had also spun out a non-profit, open-access publishing effort that would eventually become OpenStax.

Within a year of becoming director, Vardi led an effort to raise federal and industry money to build the Rice Terascale Cluster, which was then the fastest academic supercomputer in the state. The research computing platform was used by dozens of faculty, and the institute won continued support for ever-faster supercomputers. The institute was renamed in Kennedy’s honor after his untimely death in 2007, and in 2015, the Ken Kennedy Institute and longtime Executive Director Jan Odegard played a key role in establishing Rice’s current model for shared research computing resources.

She said it is an honor but also an intimidating task to succeed Vardi as institute director because of his powerful and visionary leadership.

“Moshe is a person who is, himself, at the forefront of computing research,” Kavraki said. “I’m just amazed at how he led this community over the years, how he managed — with the help of faculty — to establish research computing, to launch data science, to engage with industry and to propel so many other initiatives. He has left his mark on everything computing on this campus, and I have very big shoes to fill. I look forward to working with him and with Yousif Shamoo, Jan Odegard, Keith Cooper, Chris Jermaine and all those who have provided leadership to the institute and, most importantly, our members, to help usher in a new era of excellence in computing at Rice.”

Kavraki is a member of the National Academy of Medicine and a member of the Academy of Athens. She is a fellow of the Association for Computing Machinery (ACM), the IEEE (formerly the Institute of Electrical and Electronics Engineers), the American Association for the Advancement of Science, the Association for the Advancement of Artificial Intelligence and the American Institute for Medical and Biological Engineering. Her many awards and honors include Rice’s Presidential Mentorship Award, ACM’s Grace Murray Hopper Award, ACM’s Athena Lecturer Award, a Sloan Fellowship, IEEE’s Academic Career Award in Robotics, recognition as a Brilliant 10 Scientist by Popular Science Magazine, Rice’s Charles Duncan Award for Excellence in Research and Teaching, a Whitaker Investigator Award and recognition as a top TR100 investigator from MIT Technology Review Magazine.