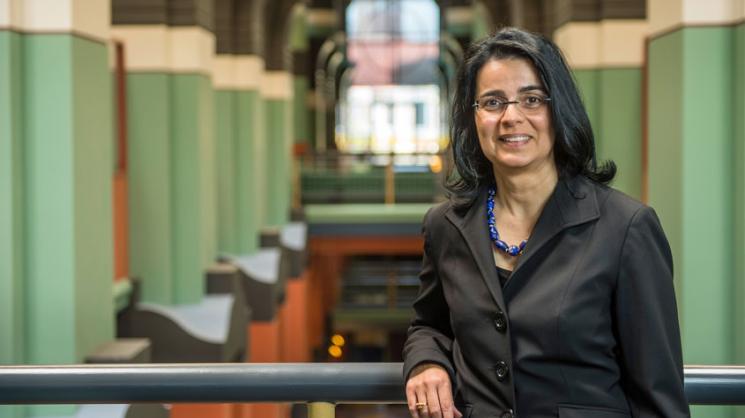 Renowned Rice University computer scientist Lydia Kavraki has been honored for her foundational contributions to the discipline with the 2019 ACM/AAAI Allen Newell Award.

She was recognized for her “pioneering contributions to robotic motion planning, including the invention of randomized motion planning algorithms and probabilistic roadmaps, with applications to bioinformatics and biomedicine.”

“This award to Lydia is the latest in a long list of awards she has received in recognition of the excellence of her work and her group’s work. She has built her entire stellar academic career here at Rice, working with Rice students, all of whom have gone to successful careers in academia or industry. If you really want to make it big, you can make it big here. Look no further than Lydia for a proof,” said Luay Nakhleh, J. S. Abercrombie Professor of Computer Science and of BioSciences and CS department chair.

The Noah Harding Professor of CS and director of Rice’s Ken Kennedy Institute, Kavraki has published more than 240 peer-reviewed articles that have been cited more than 28,340 times. Her h-index is 71, according to Google Scholar, and she is co-author of the textbook Principles of Robot Motion, published by MIT Press.

“Lydia’s research has solved problems that for several years seemed beyond reach from a computational point of view. She has worked on problems that range from docking the space shuttle to the orbiting space station to planning for re-configurable robots. She is currently working with NASA on planning the motions of its Robonaut. Lydia has always sought to make her work accessible and usable,” said Moshe Vardi, the Karen Ostrum George Distinguished Service Professor in Computational Engineering and University Professor at Rice.

Her seminal 1996 paper, “Probabilistic Roadmaps for Path Planning in High Dimensional Configuration Spaces,” was the first to establish a probabilistic approach to developing roadmaps for high-dimensional spaces, which has become one of the key techniques for motion planning for complex physical systems. It has been cited more than 5,310 times.

A native of Greece, Kavraki received her B.A. in CS from the University of Crete and her Ph.D. in CS from Stanford University. She joined the Rice faculty in 1997 and is also professor of bioengineering, electrical and computer engineering, and mechanical engineering.

A member of the National Academy of Medicine and the Academy of Athens, Kavraki is a Fellow of the ACM, Institute of Electrical and Electronics Engineers (IEEE), American Association for the Advancement of Science, AAAI, American Institute for Medical and Biological Engineering and World Technology Network.

She has recently been recognized with BioHouston’s Women in Science Award and the Anita Borg ABIE Technical Leadership Award. In 2017, Kavraki received the ACM Athena Lecturer Award. Earlier this year she received IEEE’s Robotics and Automation Society Pioneer Award for her fundamental contributions to robot design.

The ACM/AAAI award was established in 1993 to honor the memory of Allen Newell (1927-1992), a researcher in computer science and cognitive psychology at the RAND Corporation and Carnegie Mellon University’s School of Computer Science, Tepper School of Business, and Department of Psychology.