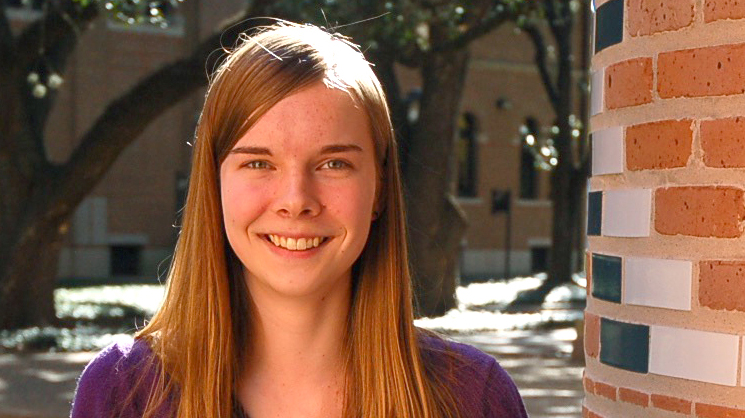 “At its heart, it isn’t about programming. It’s about solving problems,” said Jesse Kimery, a senior in computer science (CS) at Rice University, explaining how she fell in love with the major even before taking a class in CS.

“I came in as a double major, physics and math,” she said. “I love studying things I can’t readily explain, like relativity and quantum mechanics. I was home-schooled. I had no exposure to CS before Rice, just four weeks of MATLAB as part of a summer research program at Baylor.”

One of her friends from math class worked on CS homework when they studied together, and she watched over his shoulder. “CS still wasn’t that appealing,” she said, “but watching someone who really loved it, I could see how captivating is must be.”

That summer after her freshman year, she returned to Baylor for a 10-week physics Research Experience for Undergraduates (REU) that required her to work with a complex MATLAB simulation. The experience showed her how important computer skills were for physics, how satisfying solving problems with a computer could be and how much she needed to learn.

Kimery took COMP 140 in the fall of her sophomore year, hoping to strengthen her skills for physics. That semester she realized she didn’t enjoy physics enough to dedicate her life to it, that her math degree would be more marketable if paired with a related degree and that COMP 140 was a lot of fun. She switched to a CS/math major in October of her sophomore year. The late transition to CS was difficult but her math background made it easier.

“Programming-wise, it took me forever to figure out how to make my computer draw a circle,” Kimery said. “But I knew about proofs, so the reasoning part was easier for me.”

As her programming skills increased, Kimery increasingly enjoyed CS. “I like making order out of chaos. Here’s a giant problem, break it down into something that can be solved in an orderly process,” she said. “As the projects get bigger, there’s an incredible rush when you get something working. That satisfaction is a major part of the reason I love CS.”

Her lack of programming experience before attending Rice has not held her back. She interned at ViaSat last summer, and will work for Square in San Francisco after graduation in May. Like her friend and classmate Jenna Netland, she says it is no big deal to be a woman in CS at Rice.

“I’ve never felt odd at Rice,” Kimery said. “I was insecure at first, because I assumed everyone else had been programming since 8th grade. But I never felt anyone treated me differently because I was a woman. Here, I am judged by my performance, not my gender.”

Kimery encourages anyone with an interest in solving problems to pursue CS, whether they had coding experience in high school or not. “Again, it’s not about programming,” she said. “It’s about how to break down a problem and how to solve it.”

Kimery also loves reading and creative writing, and finds CS appealing to her sense of creativity. “It allows you to be creative about how you solve problems,” she said. “There isn’t absolutely one way to solve something. Yes, it takes a cognitive shift to get used to talking to a computer through a programming language. But using logic and looking at problems from different perspectives – that’s the fun part.”